Millbrook's 91st Commencement Ceremonies will be held May 28 and May 29, 2022 .
Please see below the general weekend schedule.

Detailed information and Commencement invitations will be mailed in early March to parents of VIth form students. Below is a general outline of Commencement Weekend activities as planned to date.

Please don't hesitate to be in touch with Special Programs Coordinator Diane Dalton or Director of Parent Programs Barbara Gatski should you have any questions related to Commencement activities.


Dress guidelines for Commencement are as follows:
1. White shirt, navy jacket, and white pants. Millbrook will gift a school tie, and the student will have a choice of a bowtie or traditional necktie.
OR
2. Formal white dress. Millbrook will gift a pendant necklace engraved with our school shield and the graduation year, 2022.
If a student selects to receive a tie, the student may still purchase a pendant necklace at the cost of $185. Please discuss with your child, as the cost of the pendant will be charged to your My Millbrook Spending account. 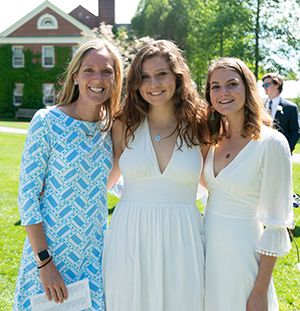 Professional photographers from Highpoint Pictures will be on hand to document the Commencement Exercises. They will take the senior class portrait, individual graduation portraits, individual color photos of all students receiving their diplomas, and as many senior commencement-day candids as they can. In addition, they will be happy to take any family or group photos you request. Just find any one of the Highpoint photographers and stand in front of the camera! Soon after Commencement, Highpoint will be in touch with you directly and make the proofs available to you online for optional purchase.

Judge Judy Sheindlin is currently the presiding judge on Judy Justice, the landmark courtroom program from IMDb TV, Amazon’s free streaming service. In September 2021, Judge Sheindlin wrapped a historic 25-year run of Judge Judy, one of the most successful programs in the history of television. Judge Judy finished as the #1 program in first-run syndication for 12 consecutive seasons and was #1 in daytime from the 1998-99 season until it concluded in 2021.
The rise of Judge Judy Sheindlin began in 1982 when Sheindlin, then a prosecutor in New York City's Family Court, was appointed to the Family Court bench by Mayor Edward I. Koch. She became a supervising judge of the Manhattan court in 1986 and heard more than 20,000 cases. During her years on the bench, she earned a reputation for tough, no-nonsense jurisprudence, and established an “open court policy,” letting the public and media view the family court process.
Judge Sheindlin is the author of seven books, including best sellers Don’t Pee on My Leg and Tell Me It’s Raining and Beauty Fades, Dumb is Forever, and over the past two decades, she has won numerous accolades and awards from the legal, academic, and media worlds. She has also sponsored many worthy philanthropic initiatives.

She was honored for her groundbreaking work with a star on the Hollywood Walk of Fame and received the Gracie Allen Tribute Award from American Women in Radio and Television and the Brandon Tartikoff Legacy Award, named after the late broadcasting pioneer. In 2012 Judge Sheindlin was inducted into the prestigious Broadcasting & Cable Hall of Fame for her contributions to television, and in 2019 she was honored with an Emmy® Award for Lifetime Achievement from The National Academy of Television Arts & Sciences.
She has been honored with the Distinguished Alumni Award from New York Law School, the Woman of the 21st Century Award from The Women's Guild at Cedars-Sinai Hospital in Los Angeles, and the Lifetime Achievement Award and a Presidential Medal from Hofstra University’s School of Law.
Along with her daughter, Nicole Sheindlin, she founded “Her Honor Mentoring” an initiative that combines the power of youth and the wisdom of experience to inspire young women to reach their full potential. “Her Honor Mentoring” marked its 15th anniversary in 2021.
Born in Brooklyn, Judge Sheindlin attended college at the School of Government at American University in Washington D.C. After graduating, she attended New York Law School and began practicing law in Manhattan in 1965. She holds honorary Doctor of Law degrees from Elizabethtown College in Pennsylvania, New York Law School, and University at Albany, SUNY.
Judge Sheindlin is married to Judge Jerry Sheindlin, a former judge of the Supreme Court of New York. They have five children and 13 grandchildren, including Emma Levy, Millbrook Class of 2022